“He is happiest, be he king or peasant, who finds peace in his home.” 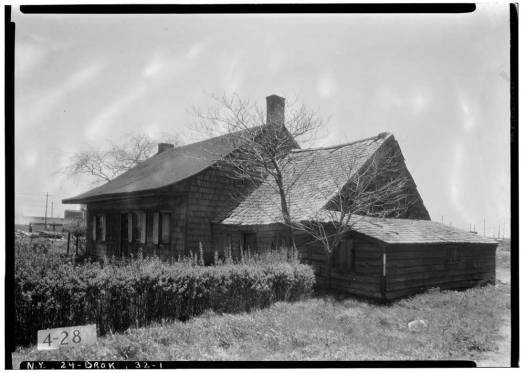 I’ve always felt that it would have been a wonderful feeling to know that there was an old homestead somewhere that had been in my family for generations and that there was still a part of my family living there, but that isn’t the case with any of my direct family lines. With the exception, of course, of the Pieter Claessen Wyckoff House which is the old homestead of the thousands of Pieter Claessen Wyckoff’s descendants that are scattered across these states (and world).

So far, I have not personally visited this place in Brooklyn as my grandmother did, but I have read a lot about it. This would have been the home of my ninth great-grandmother, Grietje Van Ness, and that of her husband, Pieter Claessen Wyckoff, and of my eighth great-grandfather, Nicholas Wyckoff, until he married. Much has been written about this house and the land that it lies on and I have not gleaned any new information to add to its story, but for those unfamiliar with it – a much abbreviated bit of information.

As near as can be determined, this house was constructed in 1652, and amazingly, still stands today. This date was determined, in part, by pottery shards dating to 1660 excavated on the property. Many additions were built onto the home over the years, including what was probably the first addition, a large kitchen wing built onto the west side of the home.

Architectural evidence maintains that the original roof was of the “salt-box” type. Although the original roof was removed during later additions, it is thought that this particular roof was developed by the settlers of New Netherlands, probably evolving from storage sheds that had been added to the back of previously built, symmetrically gabled houses. 17th century Dutch moldings that were found within the original part of the house also support the fact that the house dates to the early years of the third quarter of the 17th century.

It is believed that this house on Carnarsie Lane was built on part of a large tract of land purchased by Govenor Wouter Van Twiller (Director-General of New Netherland). In the 1652, the land was seized by the Dutch West Indie Company and when Van Twiller was recalled to Holland, he claimed that he had built houses on all of his holdings. The property then went to the Duke of York when New Netherland was ceded to the English.

Pieter Wyckoff’s descendants owned and occupied the house until about 1901 when it ended up sold to Brooklyn Realty Company. The homestead went into a rapid state of decline and was scheduled for demolition when Borough Historian, James Kelly, helped to block that action. The Wyckoff family and The Wyckoff House Association then acquired the property with the intent of gifting the house to the city to establish a city park and, hopefully, for the restoration of the house. The city accepted this gift in 1970 and now the house is listed on the National Register of Historic Places and is considered the oldest home in New York City.

The house, now a museum, is located in Milton Fidler Park at 5816 Clarendon Road in the Canarsie area of Brooklyn on Long Island and was denoted as a National Historic Landmark in 1968. It is the oldest surviving example of a Dutch saltbox frame house in the United States and was one of the first structures built on Long Island by Europeans.

Although the city does own the home, it is operated by The Wyckoff House & Association. And it was to this home, a bowery once owned by the Dutch West India Company, that Grietje, and her husband, Pieter, brought their two young children when Pieter agreed to superintend the bowery of Peter Stuyvesant and where they continued to raise their growing family.

Grietje Cornelis Van Ness was born to Cornelis Hendrick Van Ness and Maycke Hendrieux van der BURCHGRAEFF around 1629 (or sometime between 1624 and 1630), probably in the Netherlands. Grietje and Pieter Claessen were married about 1646 in Beverwyck, New York.

Born to them were 11 children and those children were:

Margrietje, born circa 1648, at Beverwyck.

This is my Week #25 post for Amy Johnson Crow’s

The optional theme for week 25 was “Homestead”.

These images or media files contain material based on a work of a National Park Service employee, created as part of that person’s official duties. As a work of the U.S. federal government, such work is in the public domain. See the NPS website and NPS copyright policy for more information.

Nederlands: Vervaardigd in ca. 1684. This map of the current New England was published by Nicolaes Visscher II (1649-1702). Visscher copied first a map byJan Janssonius (1588-1664) from 1651 and added a view of New Amsterdam, the current Manhattan. The map is very accurate: each European town which existed at the time has been represented.

Van Rensselaer Bowier Manuscripts: Being the Letters of Kiliaen Van Rensselaer, 1630-1643, and Other Documents Relating to the Colony of Rensselaerswyck; New York State Library Kiliaen van Rensselaer January 1, 1908; University of the state of New York

The Pieter Claessen Wyckoff House, Brooklyn, New York: An Analysis of its History and Development and a Record of its Present Condition Preparatory to Restoration...Oppenheimer, Brady & Associations, Architects. NY,NY.

Hollie is a jill-of-all-trades and master of a few. She is your typical introvert attempting to live a simpler life in a complicated world. She has two grown children who live in a much warmer climate. When she is not researching her family's history, you might find her writing, taking some photographs, digging in the dirt, doing a little yoga, or with her nose in a book. You also might find her walking along the Ohio & Erie Canal with her other half and their two dogs, Ben and Gus - a grouchy, old mixed-breed and a spoiled Siberian Husky. If you can't find Hollie, she's probably at the library.

Genealogy, the law and so much more

News and resources covering social media, search engines, databases, archives, and other such information collections. Since 1998.

Genealogy and History in North Carolina and Beyond

Making genealogy more intersectional and accessible to all

musings of a frequent flying scientist

Exploring Ohio History One Marker At A Time

Be Strong. Be Nourished. Be Mindful. Be Beautiful.

The Art and Craft of Blogging

Blogging about my life in Wild, Wonderful, West Virginia.

Ruby Pipes
FROM THE LAUNDRY ROOM

Sorting it out one load at a time

kelsee727.wordpress.com/
Who were they? 52 ancestors in 52 weeks

About the Woods, Gaffney, Diggins and Marshall families